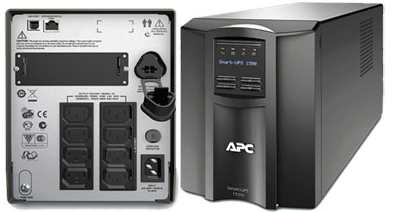 There’s nothing worst when working on a document, performing research, or breaking down the numbers in your books and the power goes out.  The computer goes out, the server reboots, and the internet is nowhere to be found.  We all have been there at some point but it doesn’t have to be this way.  Protecting your data and your IT infrastructure from power outages should be on the top of the to-do list.  The most critical pieces to protect are your desktop computers (if you habit of storing data locally on your computer) and your servers.  Your modem, routers, and switches tend to get neglected but it’s definitely worth considering if you can budget for it.

UPS Battery Backup Support is one topic that requires your full undivided attention as a individual supporting IT hardware infrastructure.  You should be a UPS battery and power consumption expert if you spend an hour here.  Enjoy!

How do I budget for the right UPS or UPS’s?

An average desktop computer has a power usage of between 80 and 250 watts hour of “active” use, depending on graphics cards and additional peripherals.    A laptop is 50 to 100 W/hour.  In stand-by mode the power consumption of both a desktop and a laptop falls to about a third.   The cost to the University to operate a typical computer and monitor workstation (130 watts @ 11c kW/h) for 24 hours per day, 7 days per week, 365 days per year, is $129.73.

The power company bills you on Watts consumed (Kilowatt Hours). A Kilowatt Hour is 1000 watts per hour.  Here’s an example of of active usage for the current billing cycle of like 22 days.  This works out to be 207.31 kWh or like 9 kWh each day.  My laptop alone could potentially produce  if used for like 10 hours of that day produce 1 kWh of that 9 kWh.

How to convert watts to kilowatts

ProTip!  None of this makes sense unless you first convert your electronics Watts usage an hour to killowatts.

The power in kilowatts P(kW) is equal to the power in watts P(W) divided by 1000:

Convert a 100 Watts to kilowatts

We will continue more laptop power consumption scenarios  down below.

We should all know now we are dealing with .1 kw hour laptop usage.  Let’s add additional (watts X time) time usage of the laptop.

The 1 kWh of laptop consumption brings us full circle to the graph up top.

Fun Fact!  According to the US Energy Information Administration (PDF), the average kWh cost for commercial use from January 2012 through January 2013 was 9.83 cents. So that means it would cost $731.94 to power the aforementioned server for one year.

Am I being eco friendly?

Here’s a fun and easy to use calculator to find out.

I want UPS backup now that I understand Watts.  Here are the UPS Specs…

Scroll down the bottom of the page to the section called UPS Hardware backup options.   Below is a pretty hefty server and a desktop utilizing a APC Smart-UPS

DC to Watts Conversion and Watts Lost Table
Note:  PSU is Power Supply Unit… This is what you power cord into and typically fails upon a power surge.  🙁   We get many calls for UPS battery backup support when this happens because the server is completely down.

There is a very big difference between a PDU and ATS. A PDU just provides spots to plug in power cables. A fancier one will measure total power draw, or even on a per outlet basis. It may be networkable. The most advanced allow individual power out control, so you can remotely power cycle a device, or power on, or power off.

An ATS is an Automatic Transfer Switch. It is designed to take power input from 2 separate sources, and use them to feed power to devices that have just a single power supply. An ATS can be used to take power input from two separate UPS, or UPS and utility power. I have several pieces of equipment with only 1 power supply, so this is a way to keep them running in event of UPS failure. I can’t tell you how many times I have had a site go down because the battery in a UPS failed. Last time was just a few weeks ago for a UPS that was several years old, but was just put into service maybe 3 months ago.

Maybe you need a fancy PDU, and maybe you don’t. You certainly need a UPS, but my guess is that we may only get 5 minutes of runtime (it will be less runtime with age) from the UPS like…

Basic PDU, A basic power strip can work in place of a basic PDU.

For best UPS battery backup support results, get a fancy PDU with ATS feature and a couple UPS in case one fails; make sure those batteries last more than five minutes.

There you go.  You went from no knowledge of your power consumption and power backup to being an expert.  Congrats!